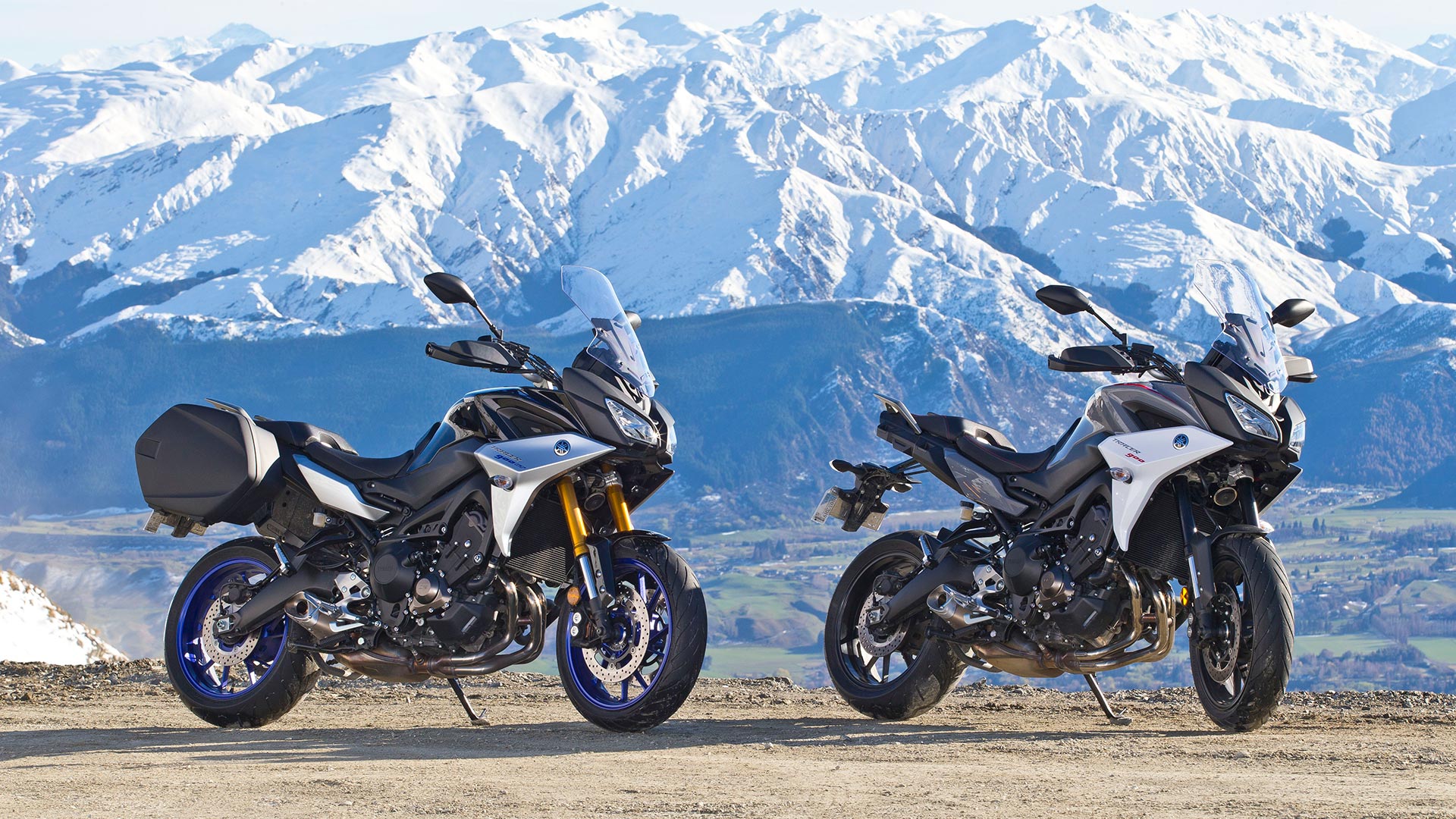 The Australian launch of the updated Tracer 900 and Tracer GT was staged under the shadows of The Remarkables, a very aptly named mountain range overlooking the equally mesmerising Lake Wakatipu on New Zealand’s South Island. MCNews.com.au editor Trevor Hedge took the journey across the Tasman, to sample the new model and now reports back in with his findings. 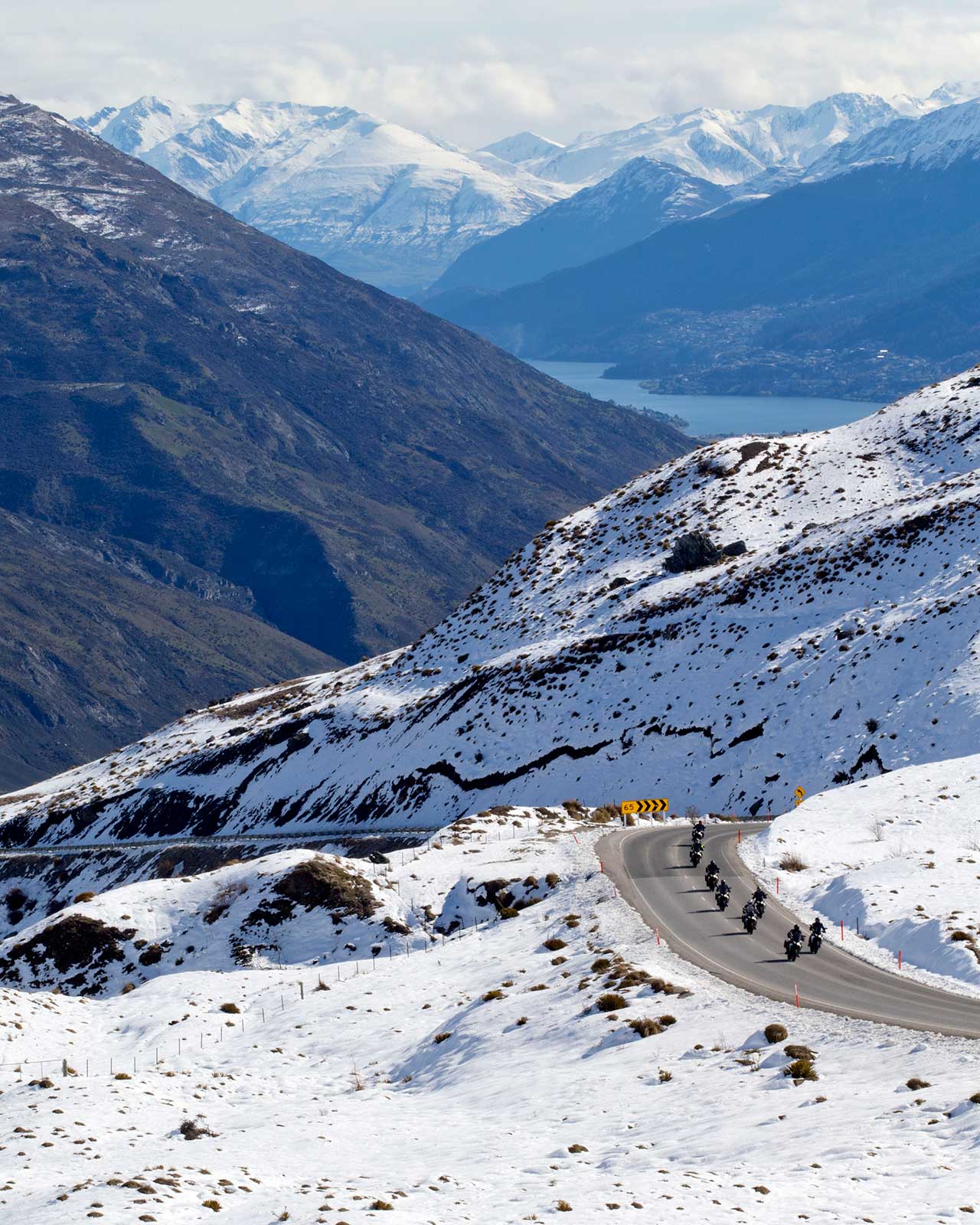 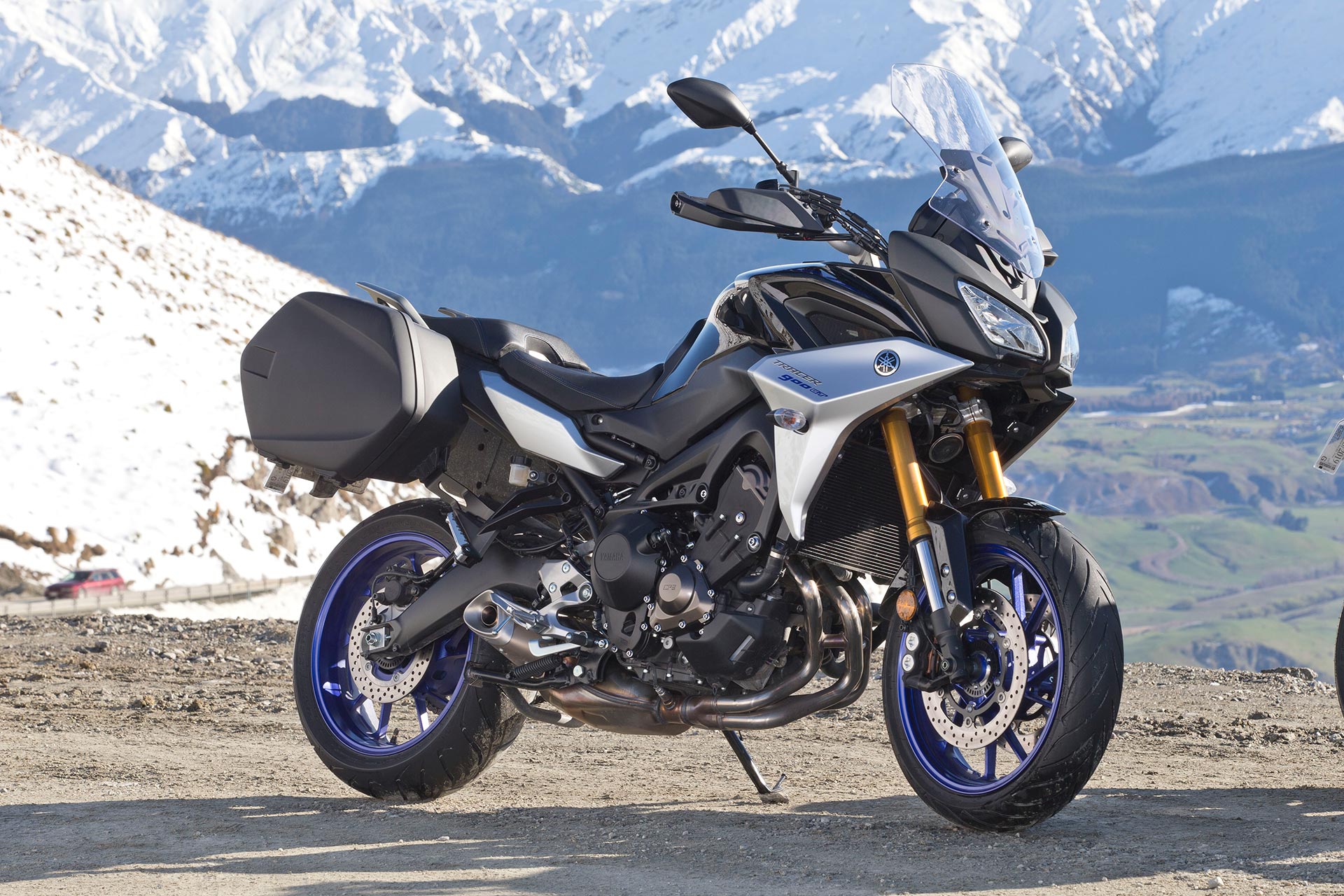 Yamaha’s 847cc triple-cylinder mill has already earned a place in modern motorcycling folklore. The original MT-09 launched back in 2014 was an absolute riot, in fact some thought it perhaps too much of a riot, largely due to its snappy throttle response and pugnacious character.

I never really had much of an issue with it, but it did become much smoother in the 2017 revision to the MT-09, and the Tracer also offers a smooth pick up from a closed throttle. The throttle response is not as linear as I might like as I did have to adapt to the ramp rate of the throttle, eventually though I just aligned my synapses with the way the CP3 triple responds to throttle inputs and started to gel with it. The machine I rode had basically zero kilometres on the clock and felt a little tight, which could also have amplified that character trait as it spun up higher in the rpm. I did try the three riding modes but found standard works best and renders the other two largely redundant. 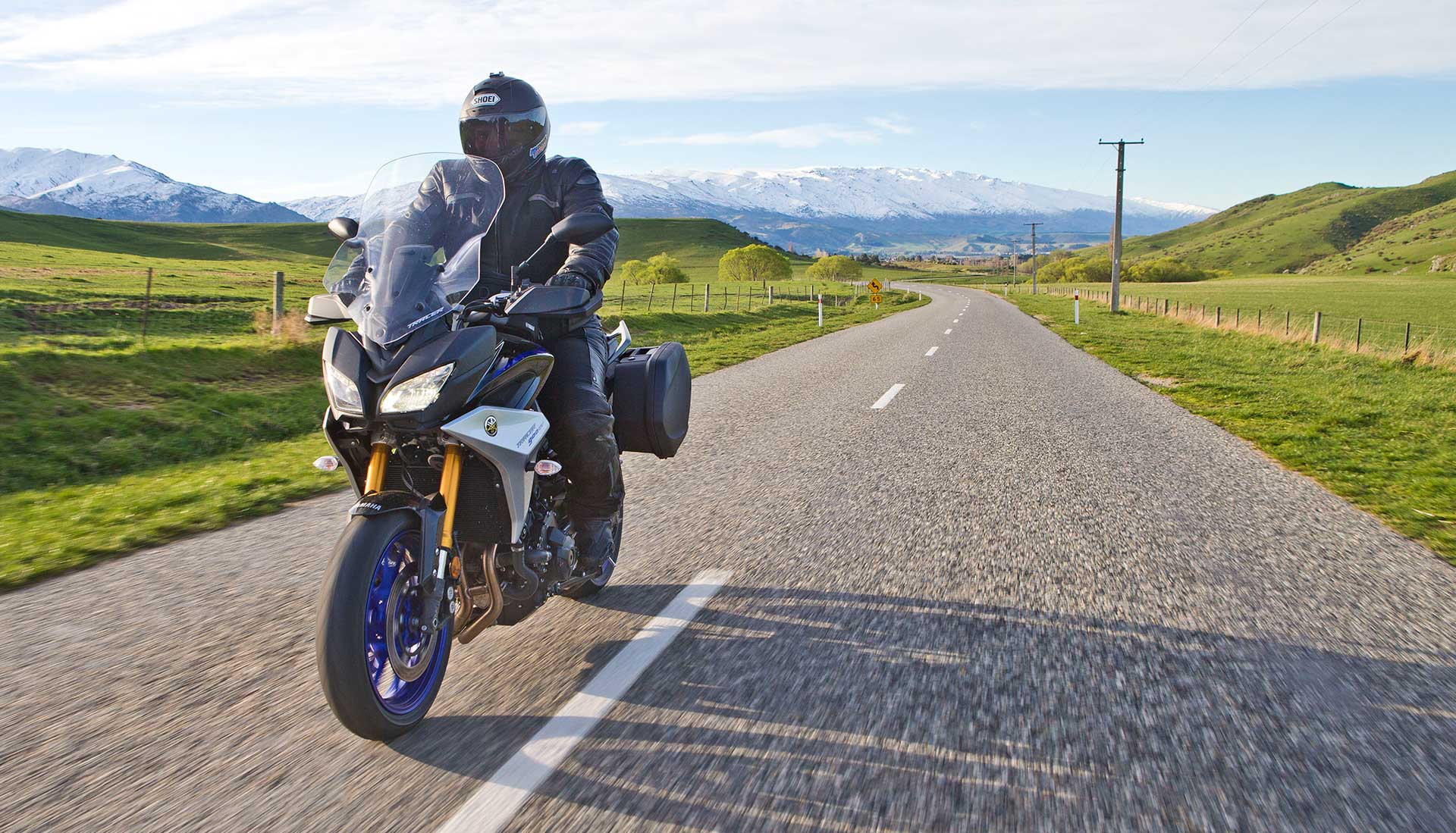 The Yamaha engine is smoother and perhaps a little less raucous to your senses than Triumph’s recently updated 765RS, and the larger Yamaha triple requires less rpm for its similar power output. Claimed numbers for Yamaha’s 847cc Tracer are 113.4 horsepower at 10,000 rpm while the 88 Nm torque peak arrives at 8500 rpm.

In general use there is certainly no need to use anywhere near those sort of revs. Just short shift through the sweet six-speed gearbox with the aid of the quick-shifter (up only and standard on the GT), and you are rewarded with seamless shove that quickly propels you to the speed limit and beyond. Along with a light slip-assist clutch, this helps to make the Tracer a great commuter. 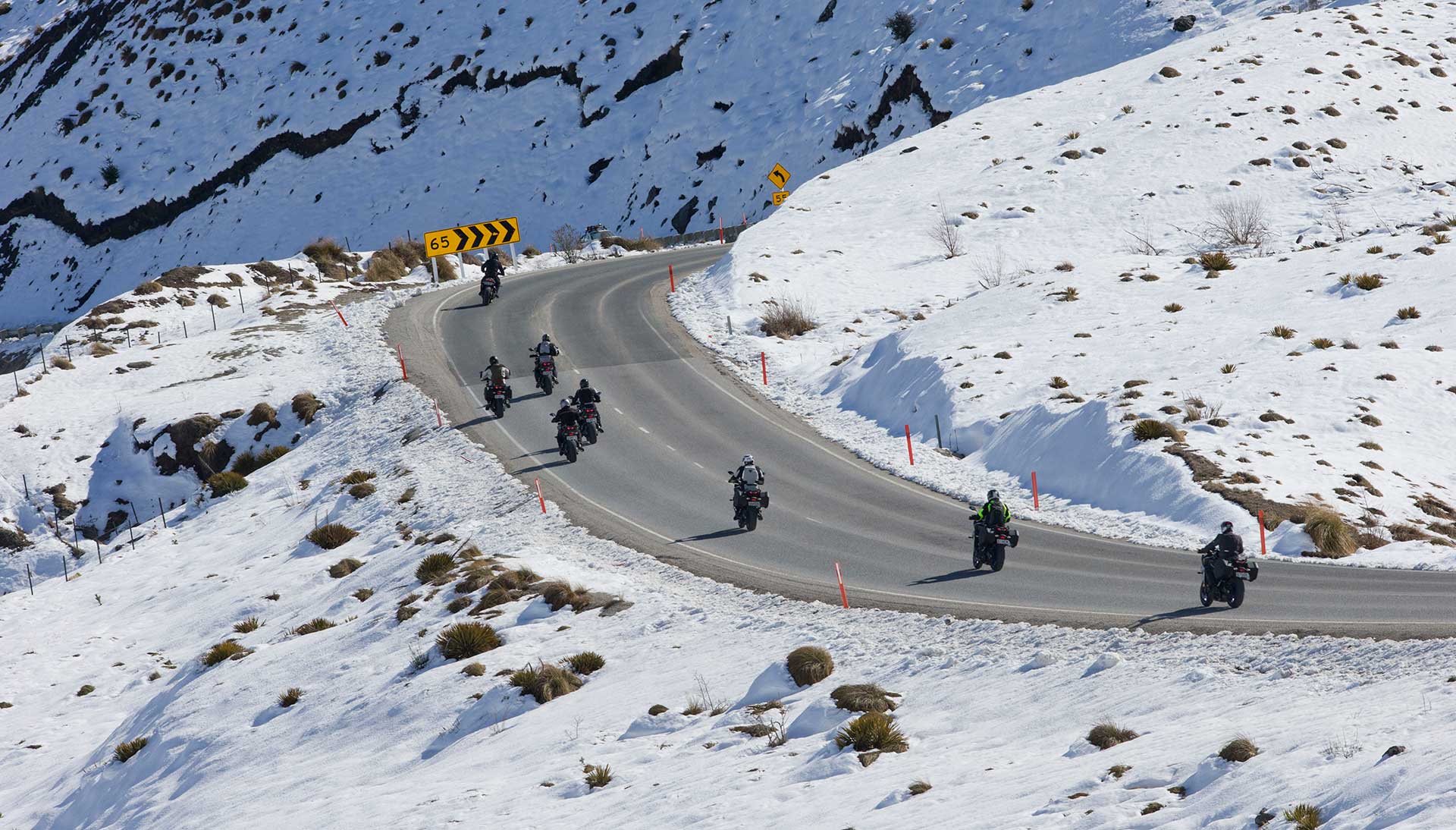 At a steady 100 km/h on the highway the Tracer is turning less than 4000rpm. Our test loop around Queenstown, Glenorchy and Wanaka was certainly no economy run, but the tall gearing and relaxed gait of the Tracer at highway speeds suggests that Yamaha’s claims of a 300km touring range from the 18-litre tank is entirely feasible.

Cruising on the GT

Cruise control is standard on the GT, simple to use and Yamaha had to move to a new ECU that now controls an updated throttle body to implement this new feature.

While that tall gearing does have its advantages, more sporting riders may favour a different rear sprocket to shorten the final drive ratio. It would certainly help with the wheelie action as getting the Tracer up in second is a bit of an ask. It lifts off the throttle quite easily in first and can be shifted up the box, but it can’t just be ripped up in second like its MT-09 naked-bike sibling. 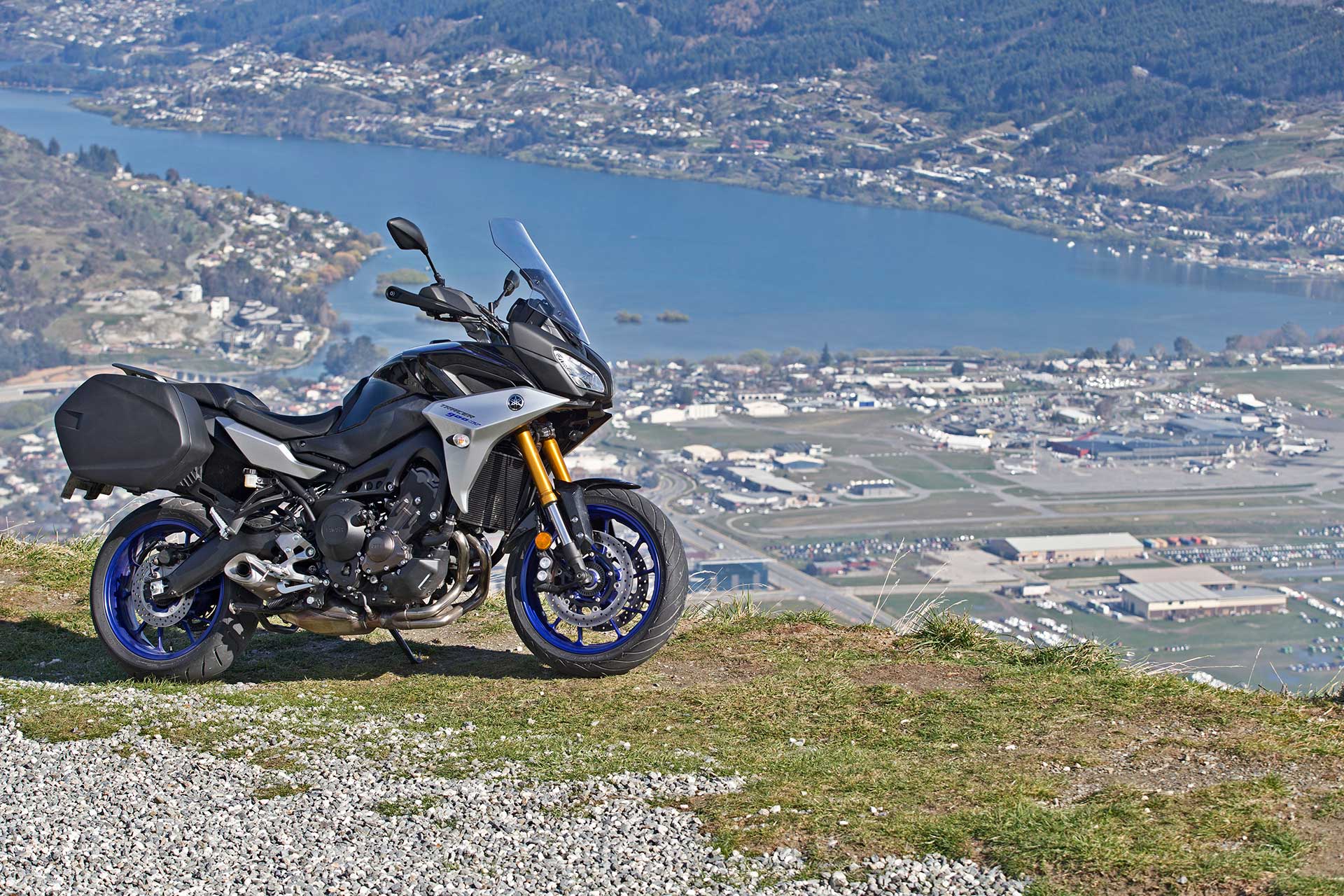 For a relatively modest $1500 premium the Tracer GT comes with a substantial amount of extra kit and improvements over the also much improved base Tracer 900 model.

Tracer GT equipment over base Tracer 900 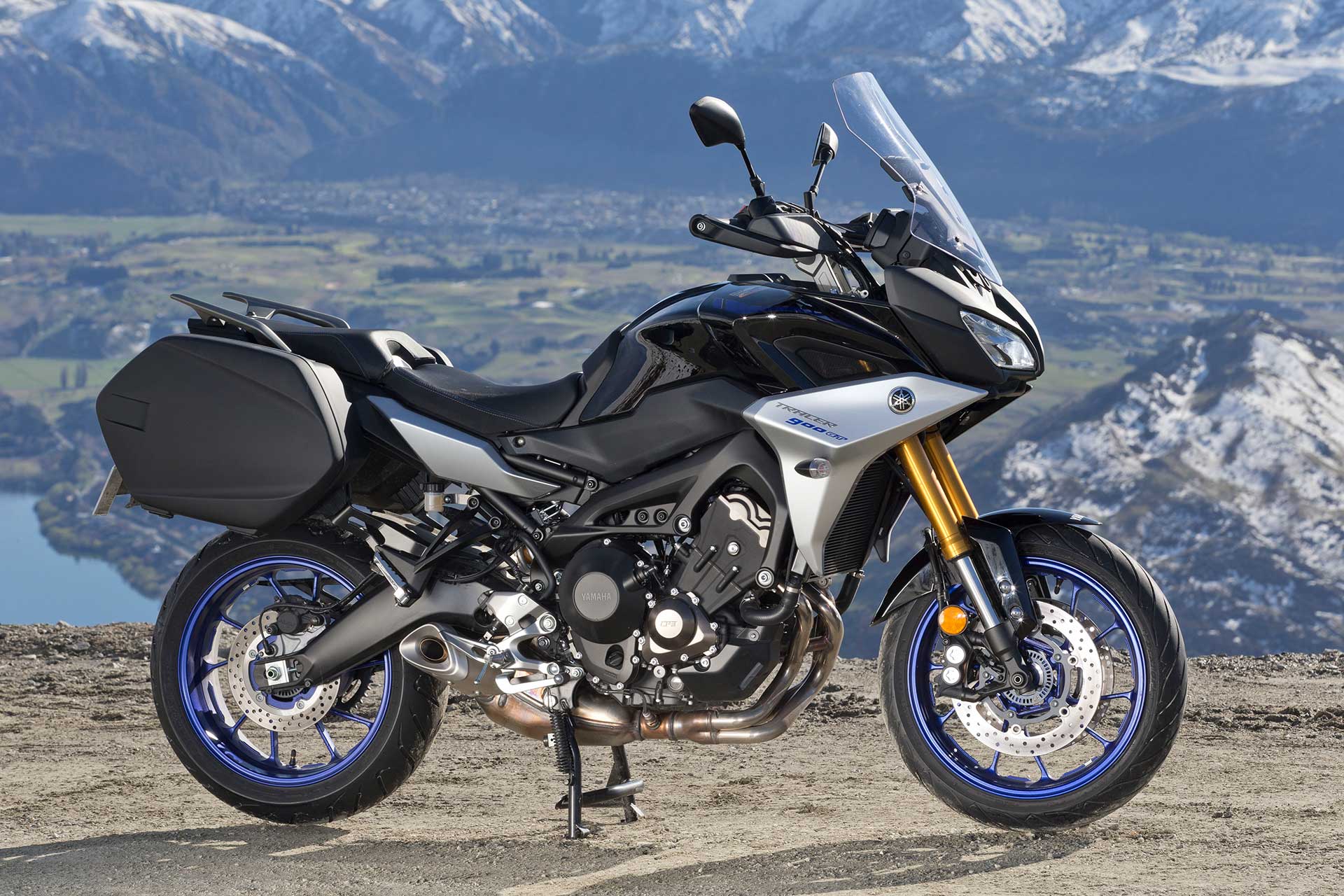 That is a serious swag of extra kit for only $1500, and should ensure that the GT out-sells the base bike by a considerable margin.

The base model has also benefited from the ergonomic improvements for both rider and passenger, and also features the new adjustable screen. The screen works reasonably well but long distance riders would likely prefer the optional larger screen. 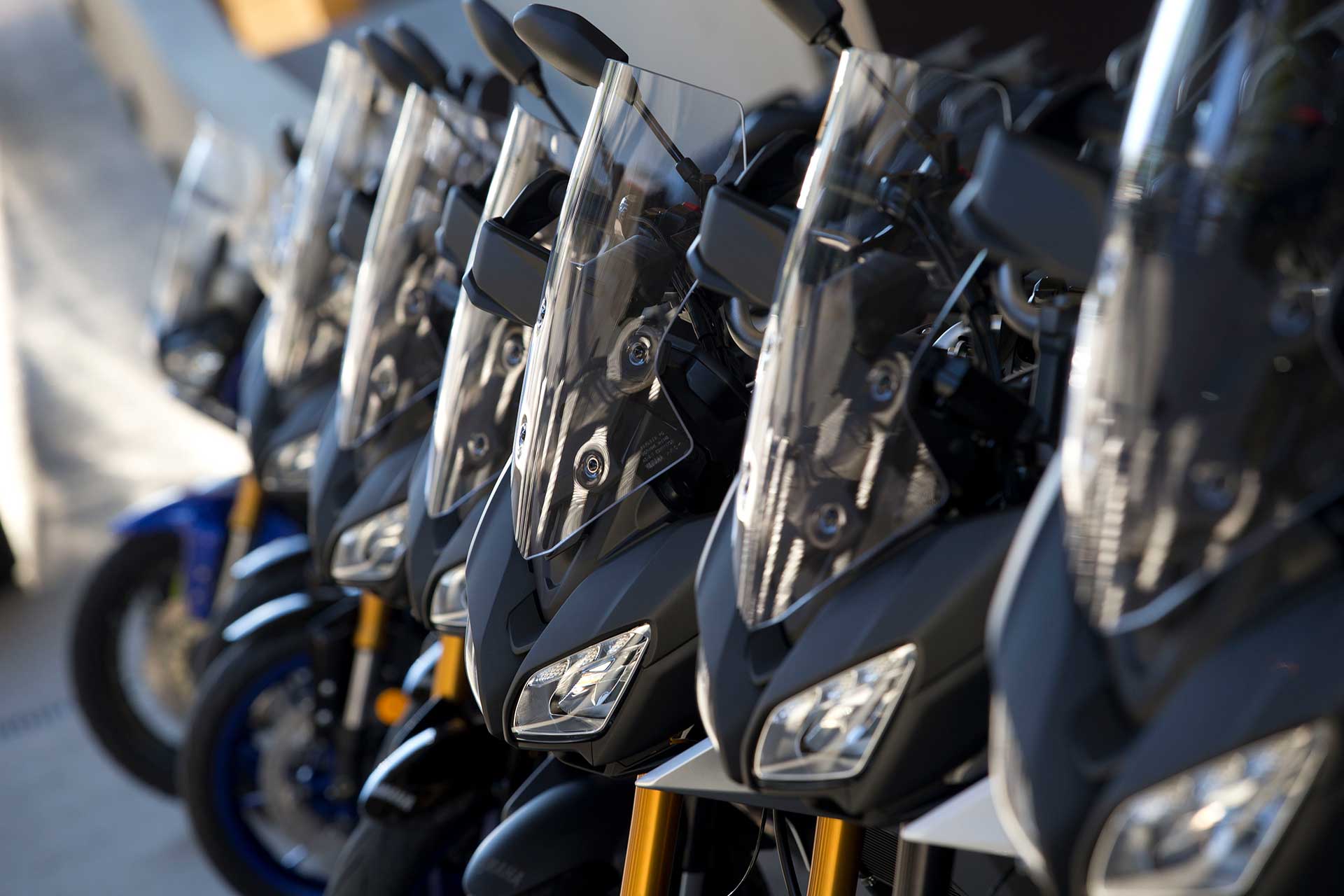 A more comfortable seat was on the wish-list for owners of the previous model, Yamaha listened and have made the changes. The seat is perhaps a little tall for some, especially when you need to swing your leg over the panniers, but is adjustable from 850-865mm. Both models also benefit from the higher level of fit and finish introduced for this new model year. 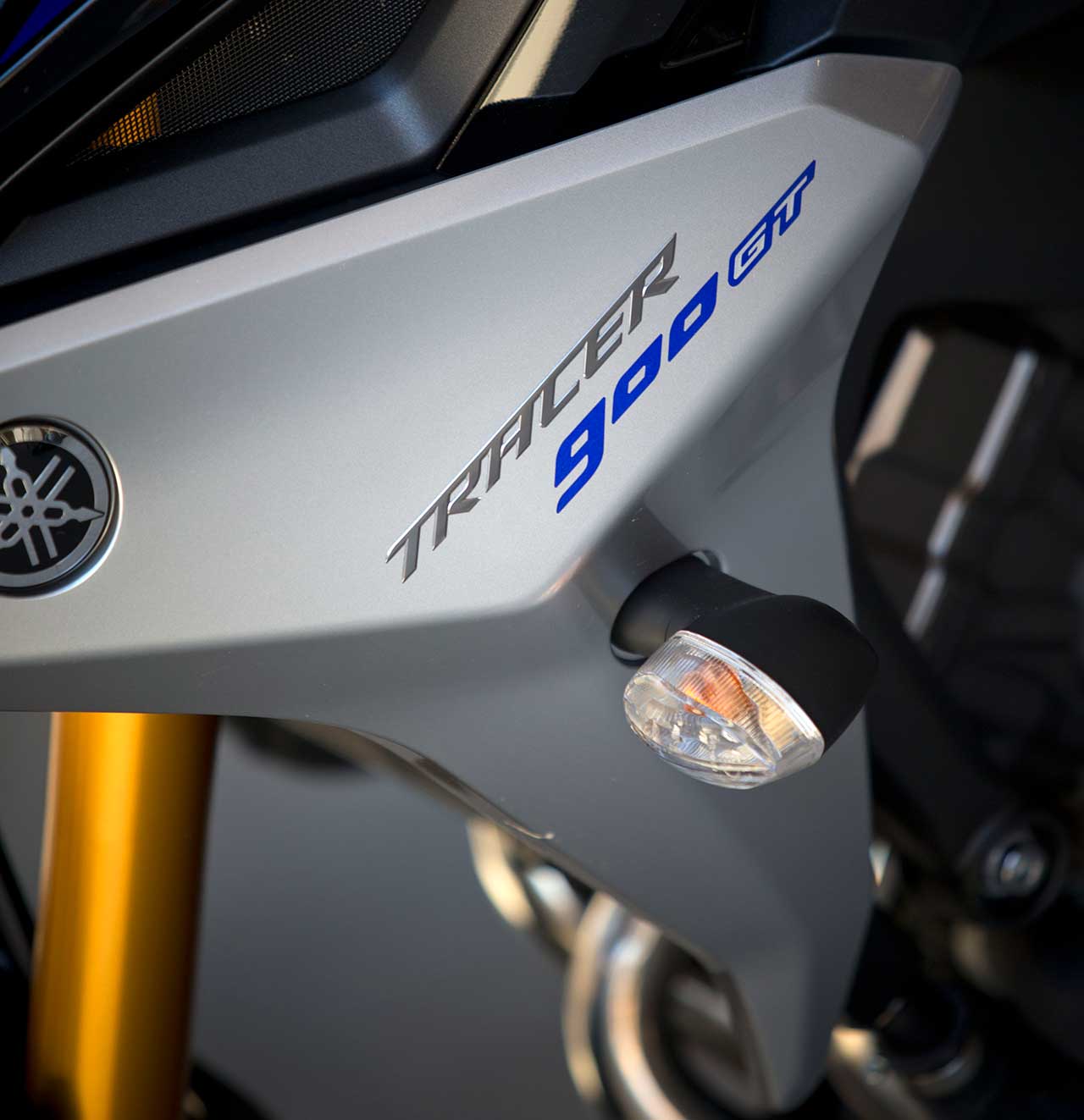 GT suspension is a big improvement

One of the most significant benefits that dramatically improves the overall riding experience in every scenario is the higher-spec suspension fitted to the GT. The inverted 41mm KYB forks are fully adjustable in the GT while at the rear a tauter shock boasts a hand-wheel for easy preload changes and is also adjustable for rebound damping.

Even if you never touch a clicker and leave them on standard settings the GT suspenders are superior in every way to that found on the base model. I was really quite impressed by the damping control exhibited at both ends. 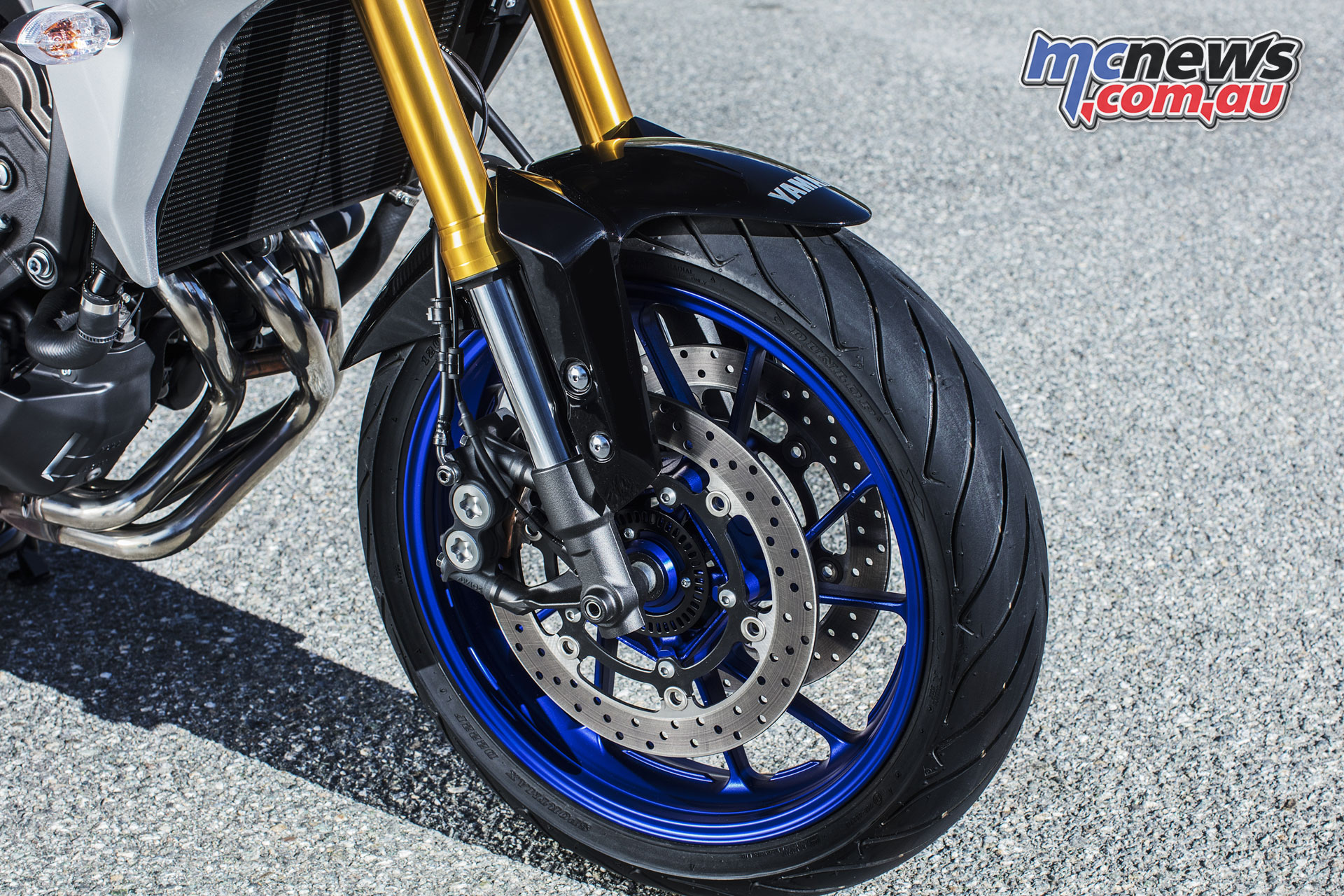 Suspension on the standard bike is not bad by any means, but the GT suspension is certainly a lot more controlled and this not only means higher performance, but also translates to improved rider comfort on bumpy roads. Win-Win.

For this model year Yamaha have extended the swingarm by a considerable 60 mm. I presume this is to endow the Tracer with more stability in order to better cope with the standard panniers. The trade-off is that in very tight switchback turns the Tracer takes a little more force through the bars to maintain its line than would be preferable. This was only apparent in the slowest of hairpins and the Tracer certainly felt agile enough when thrown from side to side at speed. 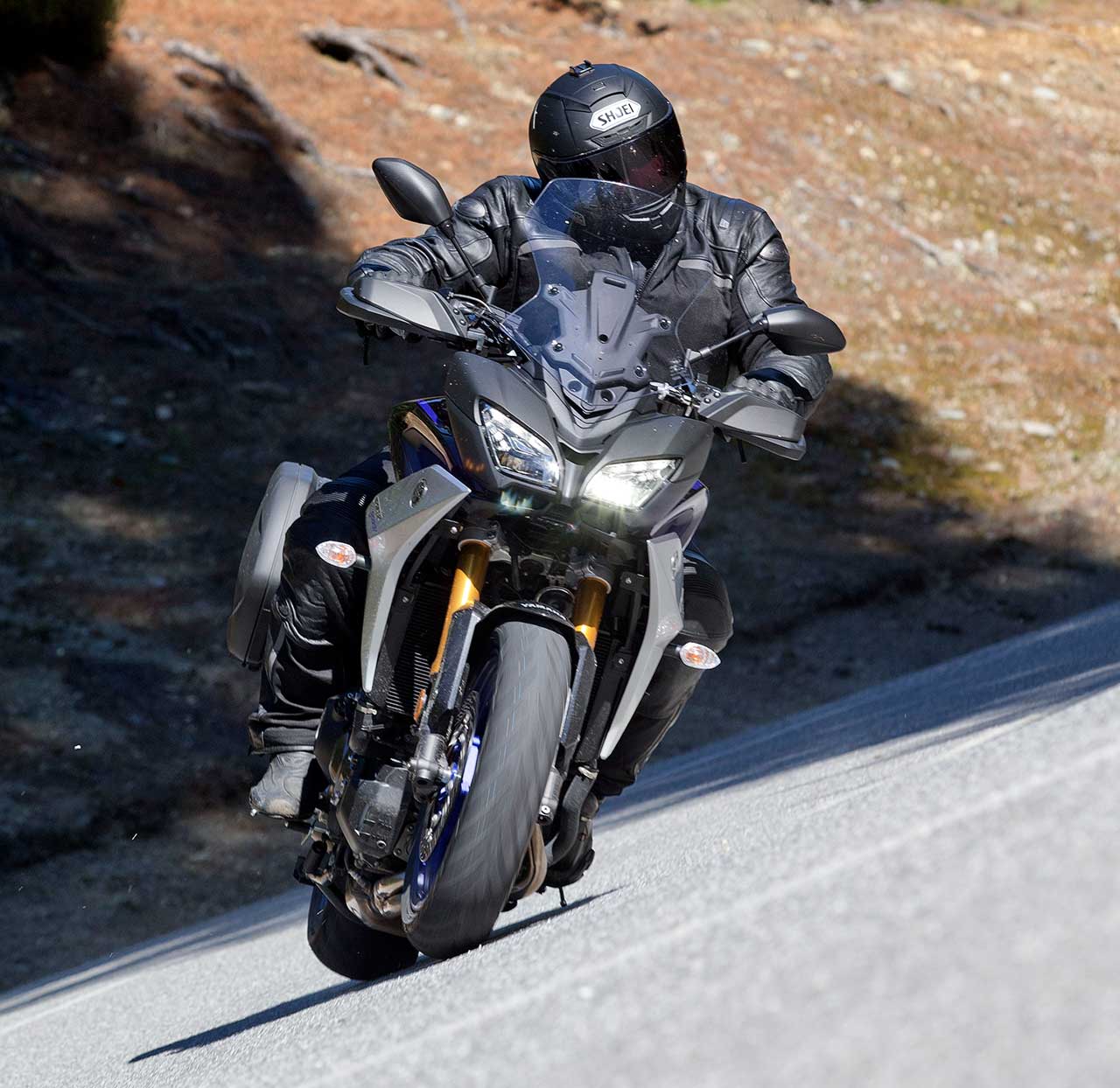 The hero-blobs on the pegs are quite long and will touch down if you are really having a crack in the bends. I suspect they are that length to warn you of impending centre-stand scraping should you not get your arse off the seat a little bit more and ride the bike in a more animated manner. Don’t worry though, I was having a proper crack before they touched down and ground clearance is pretty good for this style of machine. 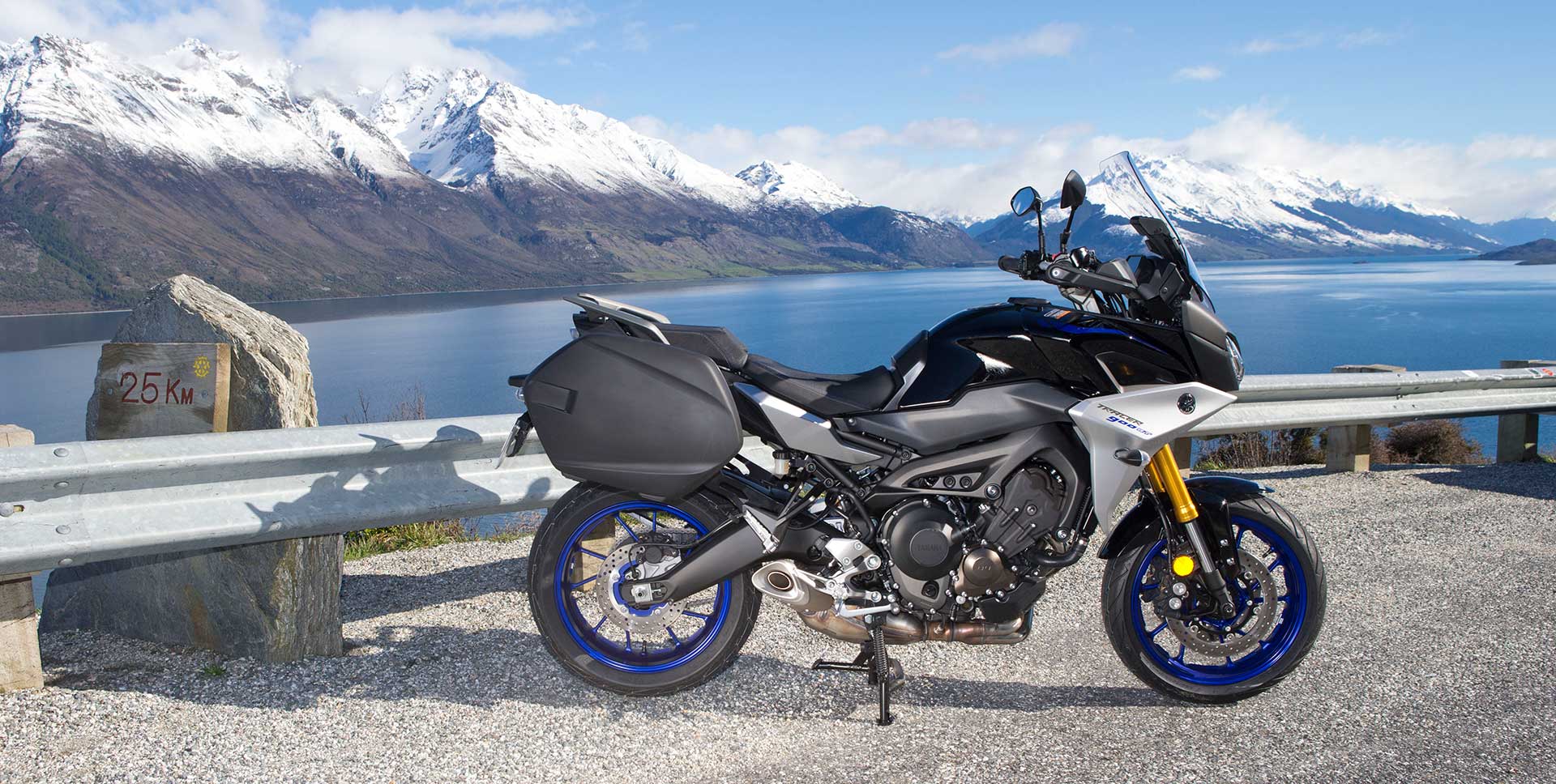 Standard panniers on the Tracer 900GT

The 22-litre panniers themselves are colour matched, have a collapsible carrying handle and are keyed to the ignition which adds further amenity. They sit close and tight on the machine via integrated hangers on the sub-frame which is the way panniers should be. This means that when full, the extra weight is kept as close to centre-line of the machine as possible rather than hanging inches away from the bike on external frames and turning the thing in to a boat once loaded. 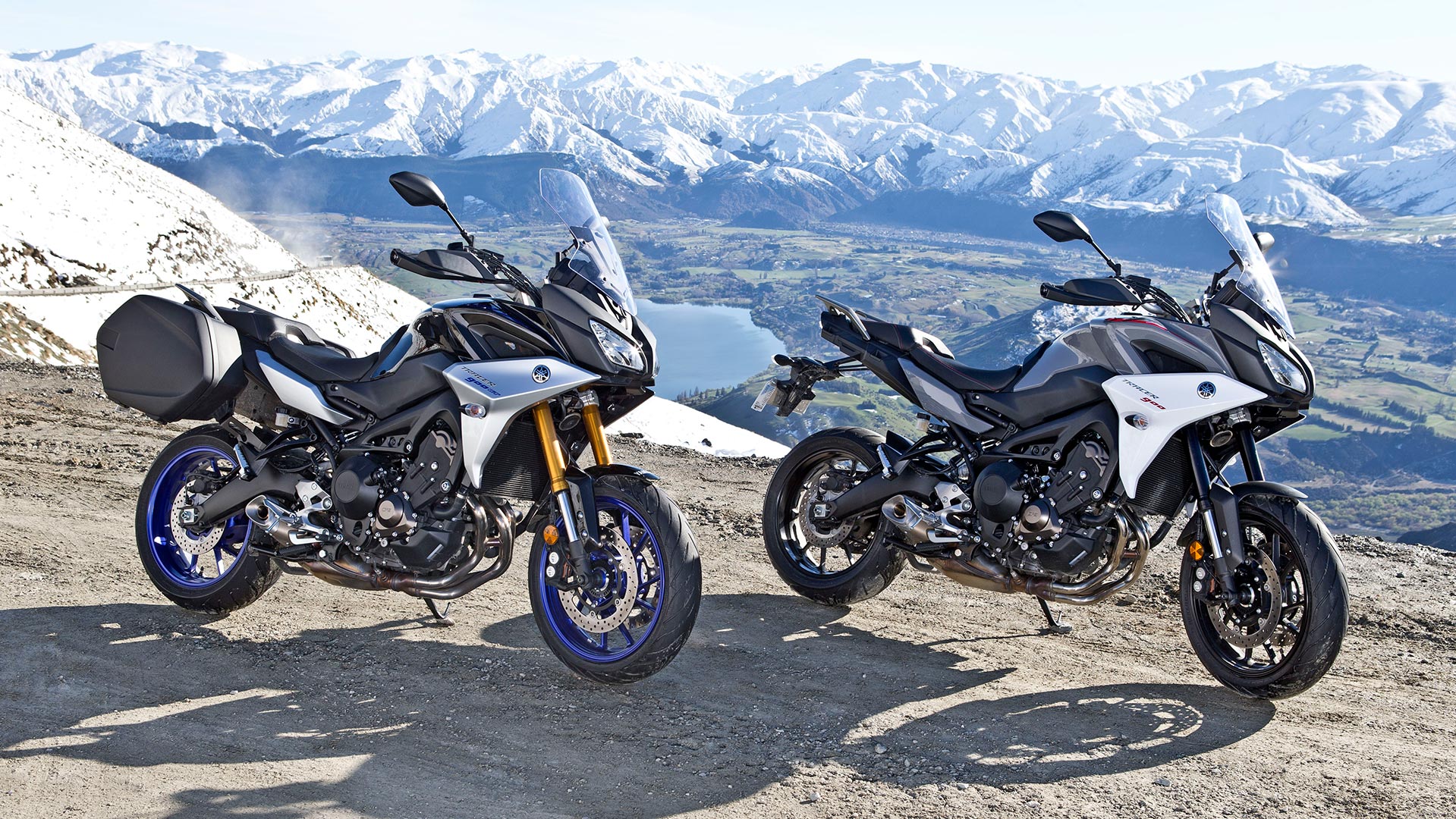 Unfortunately, the panniers could not quite fit my Shoei inside them which is a minor drawback but one worth noting. Yamaha claim the panniers are fully watertight, but thankfully NZ turned on a lovely day and we never got to put that to the test.

While conditions were fine, the temperature was certainly a little bit chilly bro’, thus the standard heated grips on the GT were welcomed. Despite the 8-degree morning the grips were actually too warm when set on the highest of their three levels, and were roasting my new Held gloves before I backed them off to the middle setting to get it just right. 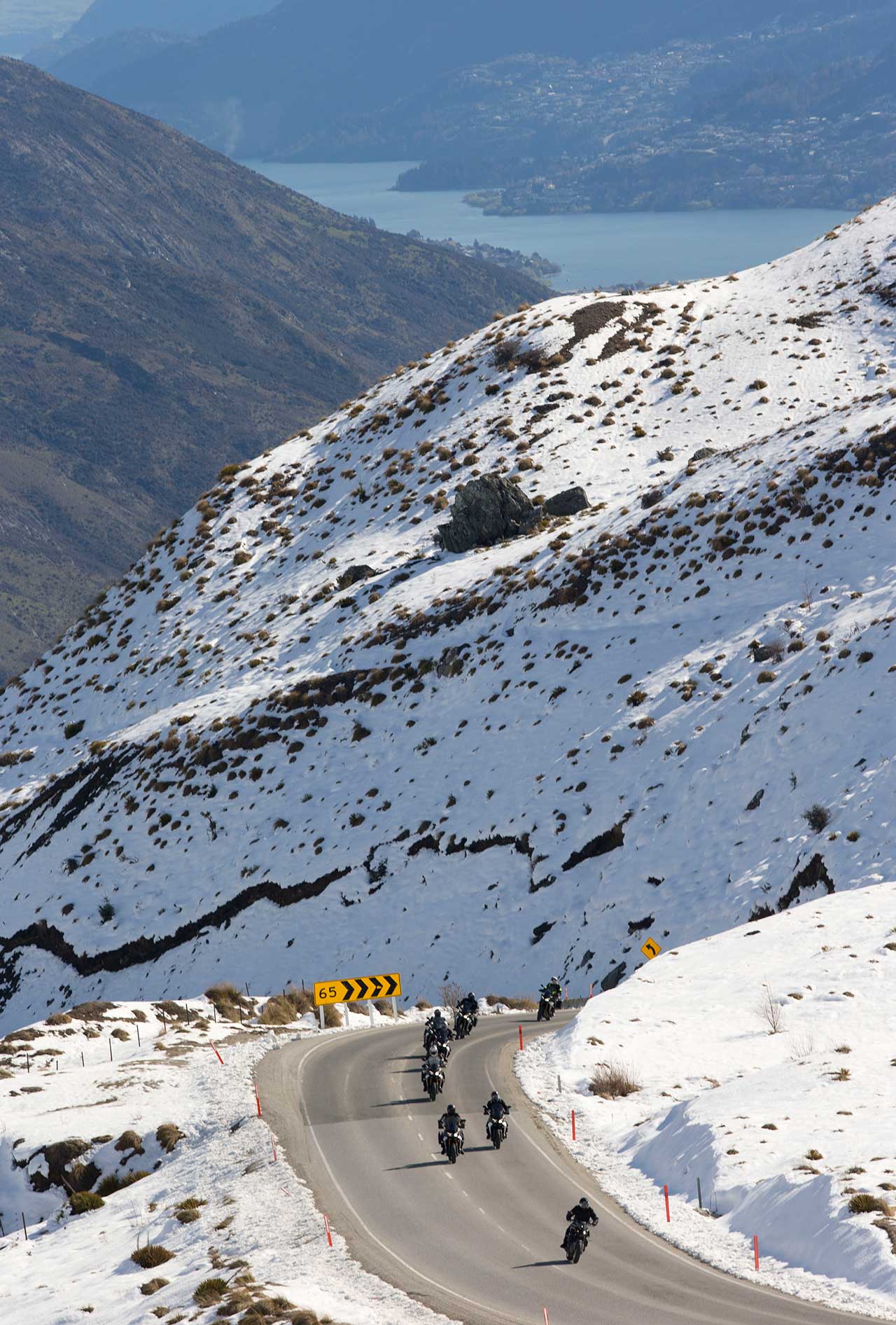 The GT also boasts a quite trick R1 inspired TFT dash. While smaller than perhaps would be preferable, it is clearly legible and simply functional. It lacks the Bluetooth functionality and navigation prompts when partnered to your phone that some of the latest instrumentation packages available elsewhere now boast. 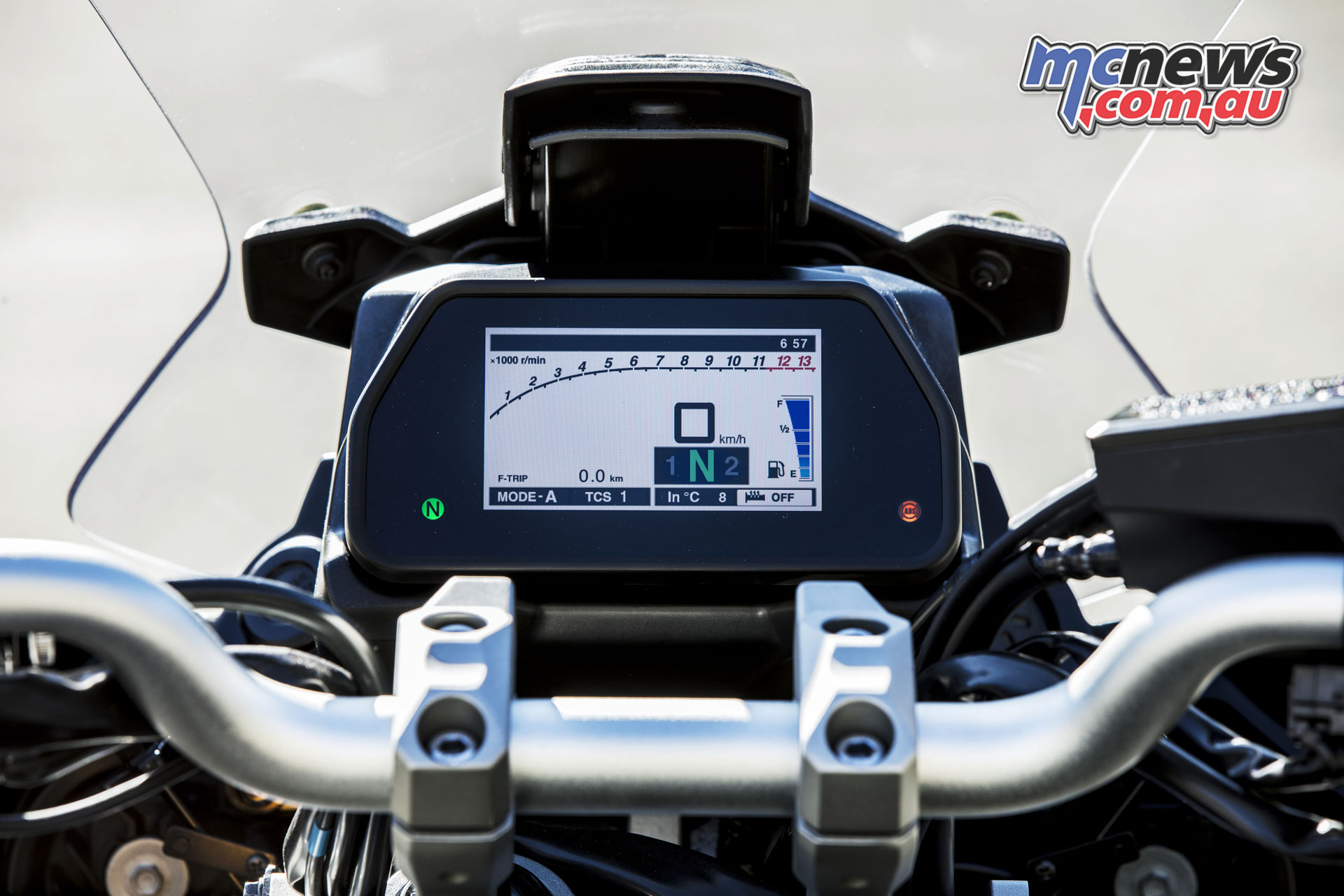 A TFT dash is also standard on the 900GT

Menus and information can be switched through via a thumbwheel on the left bar while traction control settings can be accessed via their own specific up-down buttons on the left switch-block. Traction control can also be turned off, but only while the machine is at a standstill.

Pulling out all the stops

Both models get a pair of 298mm disc rotors and four-piston radial calipers. They performed flawlessly during my time with the bike once I adjusted the lever to suit my preference. Strong, progressive and backed up by a decent ABS system they get a big tick from me. 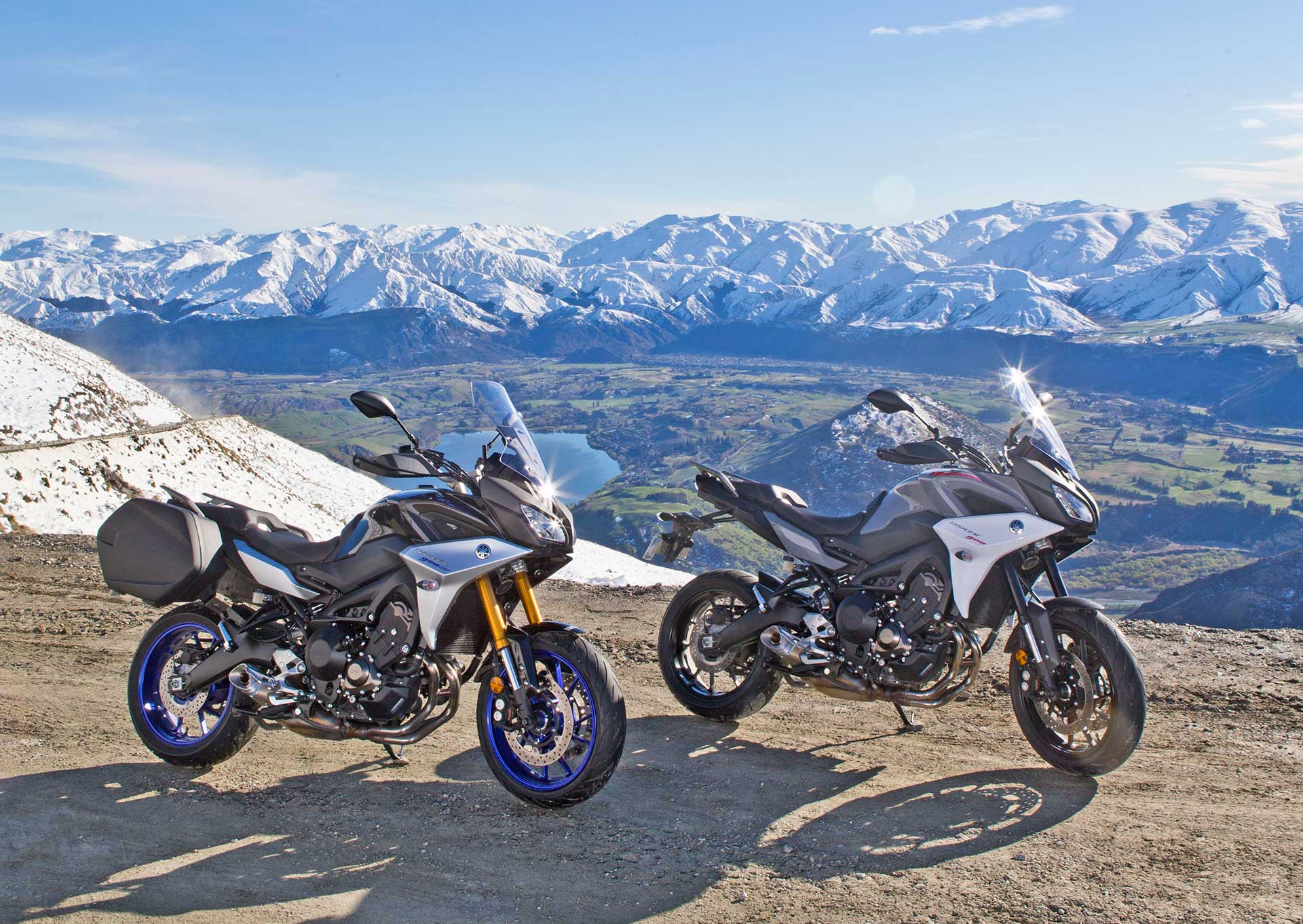 The panniers and extra kit of the GT does add 13 kg to the waistline of the Tracer but a lot of that is of course recovered when you leave the panniers at home.

Overall the Tracer GT offers a lot of bang and versatile fun for your buck. Yamaha pitch the Tracer as a ‘sports lightweight-touring’ machine, and that sums it up fairly well.

Yamaha have simply built a better Tracer, a very affordable and fun sports-touring machine with an almost up-right riding position. It is that last feature that makes a lot of riders choose an adventure bike, despite them having no intention of heading off-road, and some of these riders should perhaps try a Tracer GT on for size.

They could have jacked up the ride height and called it an adventure-tourer, but with that low-slung centre-stand and exhaust system that would always have been nothing more than fanciful pretence.

Yamaha has answered all the criticisms that came from owners of the first generation Tracer to deliver a much improved machine in the new Tracer and Tracer GT. The next question is when are Yamaha going to give us an MT-10 Tracer….? 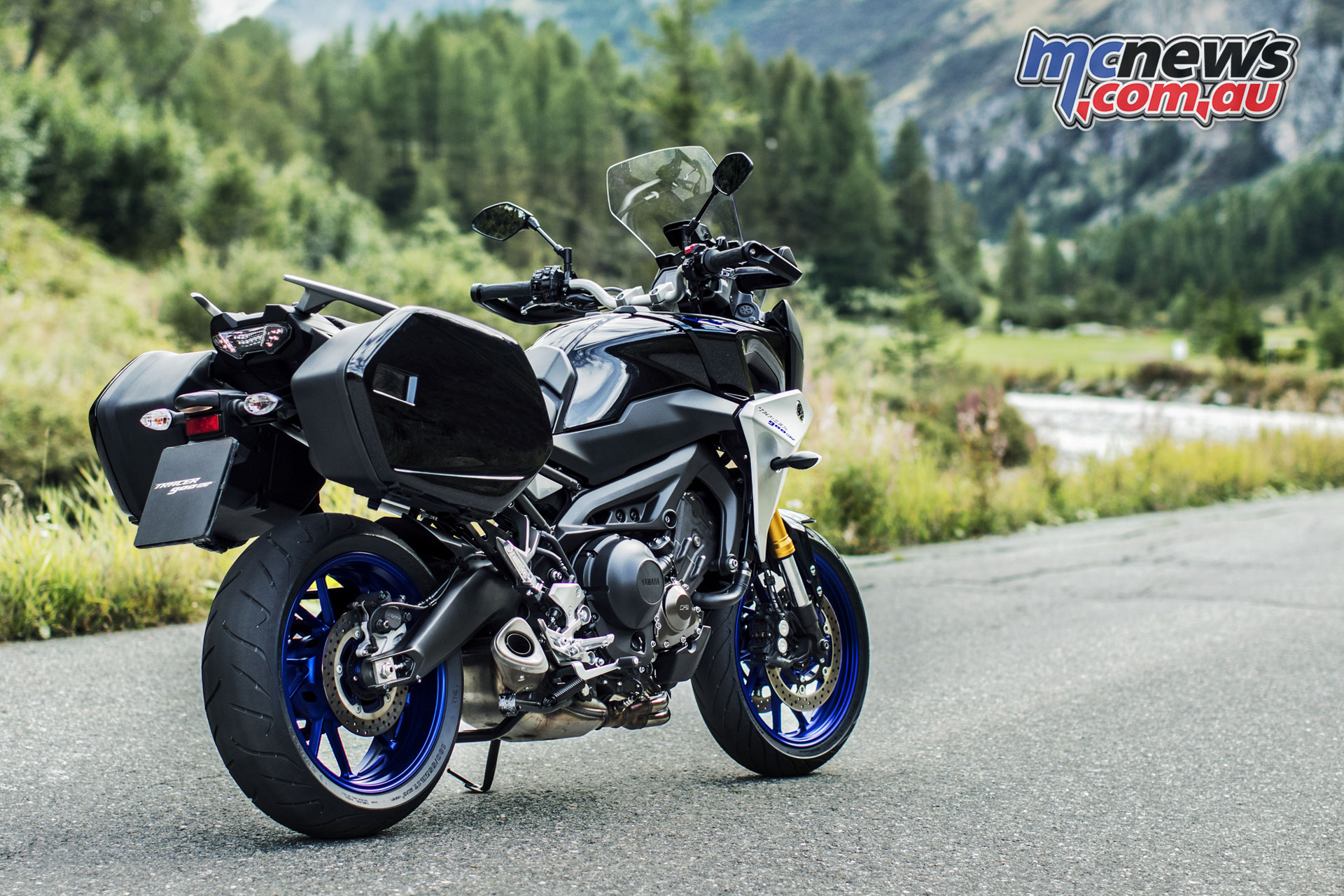 The new for 2018 Yamaha Tracer 900GT comes complete with panniers